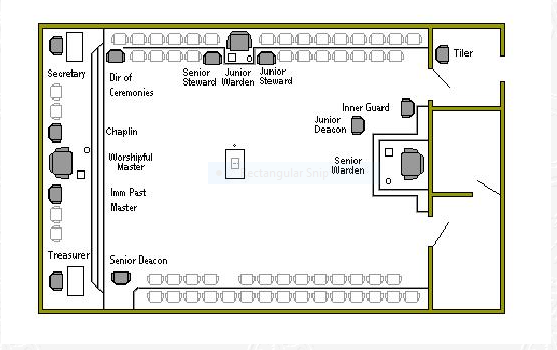 It is difficult to deny that the infiltration has penetrated very deeply into the heart of the Church when we are confronted by elements of Masonry in the very layout of some sanctuary renovations.

A fad to be found in some Australian Churches is that of eliminating the sanctuary in its original sense and placing the altar in the midst of the people.

The traditional design, with its elevated and prominent altar, clearly delineated the “Holy of Holies” as being a place set apart for the Sacrifice, accessible only to the priest and his male assistants. In the Tridentine Mass, the Epistles, Psalms and Gospel readings took place at the altar.

This leads to the idea that we are now present at Mass to “get” more than to give.

Some liturgical designers have taken this idea a step further by bringing the sanctuary right into the midst of the congregation as an attempt to disregard the proper hierarchical structure that should be present during the Mass. In this egalitarian setting, the priest loses his preeminent place and merges with the people. Focus on the priest , as a man, actually increases in this layout and the people are forced to stare at each other.

The entire setting is very anthropocentric, which is a hallmark of Freemasonry. In some of these designs, as if to increase the disrespect shown to the Lord, the priest’s chair is situated with its back to the tabernacle.

The designer of the Church above, Fr Tom Elich, contrasts the philosophy behind traditional liturgical design with his modern version. He points out that in the past, Christ was acknowledged as “celebrating the liturgy”, with the priest acting ‘in persona Christi‘, whereas today:

“Christ celebrates the liturgy, that is, the whole Body of Christ consisting of all the baptised.  The full, conscious and active participation of all the faithful in the liturgical celebration is their right and duty by reason of their baptism (SC 14).”

[As a noteworthy aside, the priest in question held, as a fundraiser for the Church’s renovations, a Black and White Ball. It is a small point, probably coincidental, but interesting in the context of this discussion.]

Thus, the shift in philosophy from theocentric liturgy to anthropocentric liturgy is reflected in Church design. Shown below is another example of a new Church that reflects “the assembly as celebrant” philosophy. This rather sparsely-decorated cathedral, described by visitors as a ‘barn’ or a ‘basketball court’, and complete with what looks like a floating storm cloud, is said by the designer to embody “a sublime narrative of spiritual life.”

A third example is this chapel in Queensland. Again we see the altar and ambo have been brought into the midst of the congregants. No sanctuary, as such, exists. congregants are left with little choice but to look at each other, instead of intently gazing, unimpeded, at the Holy Sacrifice unfolding before them.

If we compare the three churches above to the typical layout of a Masonic temple, we are at once struck by some obvious similarities.

Chairs are arranged in rows with the people facing each other. A table, known as the Table of the Book, is situated between the rows of chairs. The presiders also face into the middle. It is somewhat humorous to note that, try as we might, humans can never escape from the model of a hierarchy in their endeavours. This pattern, which God has imprinted into the human psyche, must always be respected if there is to be any semblance of order.