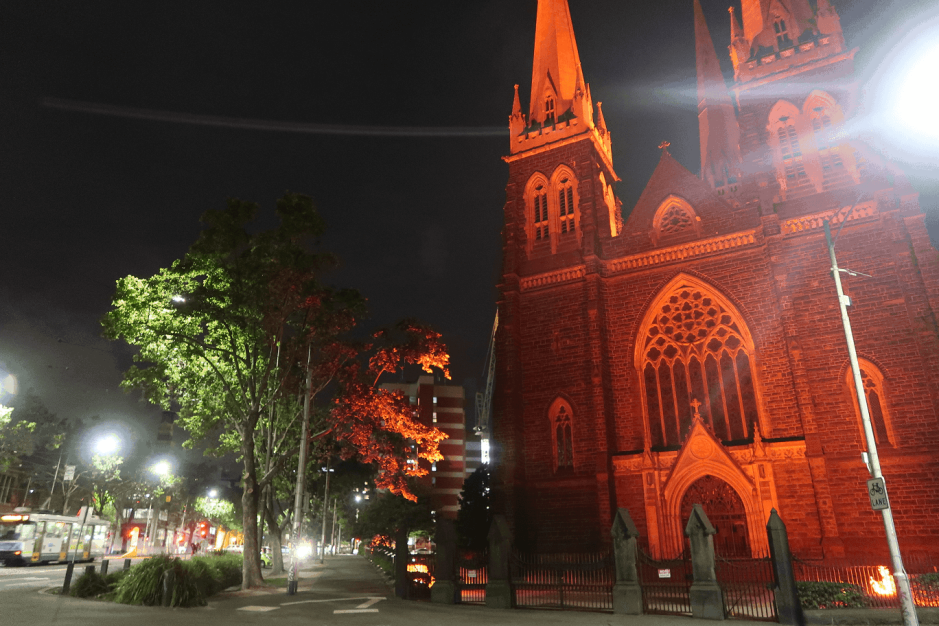 Last night was Red Wednesday, and an annual liturgy honouring persecuted Christians was unironically held at St. Patrick’s Cathedral in Melbourne. By all accounts, the evening went off without a hitch.

Non-vaccinated Catholics knew their place and waited outside until it was clear that the government-mandated quota for “undeclared status” had not been reached and they were allowed to enter the building.

(Under current Victorian health-paranoia policies, only fifty people can be present inside a church building if even one refuses to give their vaccination status to the authorities – this applies regardless of the size of the building.)

As light rain began to fall, the unclean swapped stories about which shops they had been thrown out of that day and of the buses in which they had been made to sit in the back. Apparently they felt quite privileged to have been allowed to answer their calls of nature without the need to show proof of vaccination. (Archbishop Comensoli might want to install a QR code reader in the bathrooms to see that it doesn’t happen again.)

A conscientious security guard initially prohibited entry to the unmasked as well. When they promptly knelt on the steps to pray, the somewhat shocked guard relented and advised them that they could enter sans masks. It was a real blessing that Catholics who put their faith in God were, in the end, allowed to worship with those who put their faith in gene therapy, mandates, QR codes, digital passports and the like.

Priests and laity representing various Eastern Rite Catholic groups and migrant groups were in attendance; for some reason there was no priest representing non-vaccinated Catholics. (Word on the street is that not quite all of Archbishop Comensoli’s faithful priests have handed in their resignations as yet. He really needs to try a bit harder, as despite his best efforts, some have managed to persevere by uniting their sufferings with those of the Crucified One.)

Reliable reports indicate that the evening was very prayerful and that an Iraqi priest’s homily about his experiences of persecution made a deep impression on all present. His suffering was tangible but thankfully, his faith was intact. God bless him.

Some present wondered if the persecution of Christians in his country began with closure of the churches, segregation of the populace or forced detention of Indigenous citizens. But that really is a stretch of the imagination.

Afterwards, outside the Cathedral, the conversation turned to tares and wheat, and one mean, old Trad suggested that it might be time for the Church to introduce Her very own app to be used to indicate worthiness for reception of Communion.

I’ve developed the idea here. Call it a Digital Ecclesial Passport, (DEP) if you will. Parish priests could outline their DEP policies in their weekly bulletins in this way:

Please note that it is a condition of entry to our Communion Queue (CQ) that parishioners show their Digital Ecclesial Passport (DEP) with positive proof that they are in a state of grace. Your DEP must be linked with your medical records indicating that you are not currently using artificial birth control and have not previously undergone a vasectomy, tubal ligation or in vitro fertilisation. [Exemptions apply for those who are truly repentant and have made adequate reparation for their grave sin/s.]

Please ensure that your DEP is also linked to the Diocesan Records Department, showing either a “Single” or “Regular Marriage” status, as those cohabiting or in irregular marriages will not be allowed into the CQ.

Politicians and other prominent civic personalities will require additional proof of their “Ability to Receive Holy Communion” status. Those in this category will need to link their DEP to the “How They Voted” portal, and anyone with a score of less than 99.99% on matters of morality (including but not limited to, abortion and assisted dying legislation) will be declined entry to the CQ. Note that exemptions claimed under the “I’m a Catholic, but ….” clause are invalid.

The parish priest reserves the right to exclude from the CQ those whose passports do not show:

* attendance at the Sacrament of Confession after participation in mortal sin

NOTE: Please consult the Dress Code tab on your app for information on appropriate clothing required for entry into my church.

DEPs for clerics would need some extra tweaks. Maybe a “Proof of non-involvement in Vatican Bank investments” certificate and evidence that a Grindr app had not been activated within 48 hours of celebration of the Sacraments?

The app would be free, of course, although some savvy IOR official could come up with a paid version that tracks indulgences and converts them to Bitcoin for a small fee. What could possibly go wrong?

Hmmm. On second thoughts, maybe it wouldn’t take off. Catholics simply wouldn’t allow that kind of persecution and segregation to take place in their churches.

Parents would have to start taking responsibility for their children’s formation and we all know that’s the obligation of the non-Catholic teachers with their heretical catechesis programs. And as for the dress code? Most Catholics don’t like being told what to wear – unless they’re asked to wear a mask. Masks do cover a multitude of sins, you know. (They don’t cover cleavage very well, but are known to prevent small sins of transmission.)

Better to keep things as they are, with all and sundry allowed to partake of the Holy Eucharist whenever they attend Mass. Even those pesky non-vaccinated Catholics should be able to attend, providing, of course, that the government allows it.

Under the watchful eye of the happy-go-lucky Archbishop of Melbourne, Peter Comensoli, neo-Nazi Premier Dan Andrews was given Holy Communion today at the state funeral of entertainer Bert Newton.

Dean of the Cathedral, Fr Werner Utri, placed the Body, Blood, Soul and Divinity of the Lord Jesus Christ into the hands of the man who is responsible for more murders than Jack the Ripper, due to the pro-abortion and pro-euthanasia legislation inflicted by Daniel Andrews on his state of Victoria.

Prior to the distribution of the Eucharist, Archbishop Comensoli announced to the congregation that “what has become for us the Body and Blood of Our Lord is received by Catholics – those in communion with the Catholic Church – in Holy Communion.” He then invited Catholics who come forward “in good faith” to receive Communion.

The Cathedral was packed with showbiz personalities and its administrators must have been glad they had Tap and Go terminals installed during the pandemic. The twinkling lights might have lured a few celebs into leaving donations after Mass today. If so, Andrews deserves a tip for his Faithful Catholic performance.

In addition to his existing death-dealing laws, Premier Andrews is trying to have two more disastrous pieces of legislation passed: one that will force Catholic schools to employ sodomites (although, to be honest, how many parents with children at Catholic schools would have any objections to that?) and another that could see Catholics detained for failing to be injected with harmful and immoral COVID “vaccines.”

That latter law will give Andrews unlimited power in his state without the oversight of Parliament and has received round condemnation from politicians, lawyers and QCs, grassroots activists, Christian groups and even from some progressive media outlets. One figure who has remained conspicuously silent about Andrews’ tyranny is the Archbishop of Melbourne: the same Archbishop who looked on while Andrews received Holy Communion today.

Left. Archbishop Comensoli, doing his best JPII impression. He must have missed the memo about fighting against totalitarian regimes.

For those with strong stomachs, here is the eulogy given by Daniel Andrews for Bert Newton. It contains all the hype and hubris we have come to expect from politicians who like to thumb their nose at God while flaunting their Catholic credentials. Andrews ended with the money quote, “Bert was more than talent, he was trust.”

In the face of all this dazzling celebrity, one might expect that the Archbishop could overlook some of his important obligations. But this was not at all the case, as ABC News summed up in their breathless report:

“Archbishop Comensoli gives some instructions about hand-sanitising stations before the communion begins.”

We only wish that the Archbishop would be as concerned about the state of his communicants’ souls as he is about their hygiene.